By Freddy Kgapola May 14, 2019
Undoubtedly, Lionel Messi is the best player in the world! Yes without argument, Cristiano Ronaldo is also one of the best players but with age and a move to Juventus, Messi has gained the upper hand.

Learning to play football can be very easy but mastering the game is very hard. Lionel Messi has conquered the football game - his the God of the football! 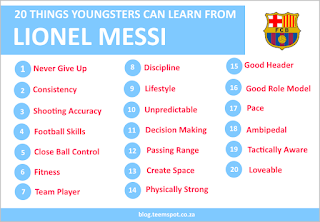 Leo Messi was born in Rosario, a port city near Buenous Aires and he was diagnosed with growth hormone deficiency when he was 11 but he never gave up playing football. At the age of 13 he was signed by FC Barcelona. Barcelona paid for his expensive treatment that allowed him to grow.He got his debut for Barcelona FC when he was 18.

He scores and assists in goal scoring every week. Since his debut in 2004, he has scored 598 goals, 251 assists for FC Barcelona.

The captain of Argentina and FC Barcelona has unbelievable skills which gives him the ability to dribble past many defenders of opposition teams. His most famous football skill is the side step. But why does he prefer the side step? Its easy to execute and when executed at full pace the skill is unstoppable. But this is just one of his many tricks that he has in his locker!

Close ball control when running with the ball

Close ball control give him the edge in 1v1 situation. The ball gets locked to his feet like a magnet while he twists and turns near the penalty box or in the box. This makes it difficult for defenders to make a tackle.

The God of football never gets tired, his always running on the pitch, his never substituted, he plays every game when he is not injured, he defends and sometime collects the ball from his half and runs with the ball almost the whole length of the pitch.

The 5 times football Ballon d'Or winner does not show his frustration to his teammates. In fact, even when losing his never been seen arguing with a teammate. Even with Argentina's bad performances in the world cup, you will never see him shouting at a teammate. He would rather retire than fight with people to get the Argentinian national team to win. For example, Ronaldo takes all the penalties for the teams he plays for while Messi shares the responsibilities with others. On the other hand he has unbelievable number of assists for goals as aforementioned.

No red cards recorded for Messi in his tenure at Catalonia! He has only received one red for Argentina, in a game against Hungary - The game was a international friendly played in 17 August 2005.

Lifestyle off the soccer pitch

The soccer genius has a remarkably drama free life off the pitch - unlike many football stars.  "I didn't go out partying because I wanted to achieve my dreams" - Lionel Messi. The type of attitude one can learn from. Moreover, by football standards the Argentinian magician lives a fairly private life, his married with one child. Unlike many other great soccer players like Ronaldhino, the Brazilian Ronaldo and Robinho who's progress of becoming the greatest players the world has seen was arguably affected by they party lifestyles. Hence, they will never play as many games as Messi and receive as many awards, and he is still looking to break more records.

The key attribute of a great player is unpredictability. When a player is unpredictable, he is not easy to mark or tactically plan for him. During the course of the game you will see the Barca number 10 changing positions a number of times, he moves to the strikers position, middle field, left wing and right wing. When he cuts in he can shoot with his left and right or dribble his way to goal, defenders don't know how to stop him.

Decision making is a critical skill of any successful soccer or football player. Decision making is critical in many phases of the game, while defending or attacking, when to pass, when to dribble, when to shoot, when to square the ball, do you play square pass in the air or ground, to name a few. The greatest player in the world has the best decision making!

The diminutive Argentine has one of the best passing ranges in world football. He goal assists are sometimes unbelievable. In the game against Atletico Madrid in 2019, Messi executes one of his trade mark passes, he switches the ball from the right wing almost near half way line to Jordi Alba who made a run into the penalty box of the opponents, Alba controls the ball inside the box but fails to score as the ball hits the post.


In the long history of football, the greatest players had ability to create space through dribbling, quick bursts of pace and amazing ball control. In every game, the Argentine is always man marked but some how manages to find space. The big question, is how does the genius created space? His movement off the ball, 1-2 passes and ball control, means that the best player in football history only needs little space to score or create goals.

Although, he is 1.7 meters tall, he surprisingly very strong and difficult to disposes. Mostly, because of his amazing ball control but his strength adds another element to his game which means defenders can not use brute force strength to stop him, they need to also be smart and quick.

His heading ability is not as great as the Portuguese star (.i.e. Ronaldo) but he is not shy to head the ball and surprisingly has quite a few goals with his head.

Have a role model

This is actually very important point, you need to have a role model, someone you can look up to and copy from to improve your game. His role model was Maradona. The way he plays sometimes resembles the great Diego Maradona. But you must not only look up to you role model, YOU MUST TRY TO BE BETTER! Sir Alex Fergerson said: "Messi is better than Maradona because Maradona career was cut short". As a result of his drug addiction problems.

Due to being short his pace is always been under estimate. However, if he gets a head start, defenders will battle to catch him. His also smart if he gets ahead of the defender he puts his body between him and the ball, leaving the defenders with few options. He is definetly not blistering fast like other players of his size such as Mark Overmas but he uses his pace very well. With the ball at his feet, his definitely the fastest!

The football hero can score equal with both feet.The tactic used by defenders to guide players on to their weeker foot and ask them to cross or shot does not work with Messi.

He is tactically aware of the plans opposition teams have for him and he counters them, by changing positions, dropping deep to lose his marker, counter attacking and slowing down the game to frustrated the opposition.

Messi is loved by most football players, fans and football expects because of the genius he produces on the football pitch and importantly his admirable candor. However, Ronaldo has more followers on social media.