Showing posts from November, 2019
Show All

South Africa again qualify for the Tokyo 2020 Olympics without winning the tournament. Unbelievably, South Africa with its huge heritage and talent in football has never won the African Cup of Nations U23 tournament. This time around South Africa was boasting young PSL talents such as Tebog Mokoena , Sipho Mbule. The Supersport youngsters were both involved and contributed immensely to Supersport United winning the 2019 MTN8 cup. The team also includes Shipa United star defender Tercious Malepe and Kaizer Chiefs defender Siyabonga Ngezana. Not to forget rasing star Keletso Makgalwa , who had just recovered from Achilles  injury, obtained in the game against Cape Town City in August. The team also included overseas-based players such as  Luther SINGH (from  Moreirense FC (PORTUGAL)) and Lyle FOSTER(from  Cercle Brugge K.S.V (BELGIUM)).   Even though South Africa has qualified, they scored only three goals, showing their weakness upfront that currently exists in South African foot
Post a comment
Read more

Kaizer Chiefs use their height advantage as a weapon - Qualitative Superiority 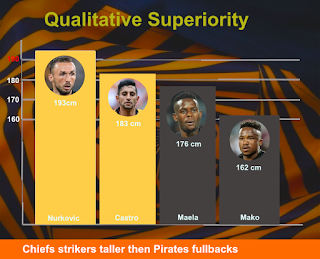 Qualitative Superiority is a player who has a clear advantage against another player in 1v1 situations. For example, Messi has qualitative superiority against most of the defenders he plays against. This is because 9 times out of 10 the Argentinian can dribble past any defender. In the Soweto derby, Kaizer Chiefs displayed a clear advantage of Qualitative Superiority when Nurkovic and Castro won every ball in the air against the Orlando Pirates fullbacks said coach Rhulani Mokwena. This forced Rhulani to tactically focus his team on winning the second ball and closing down the supply of crosses. Kaizer Chiefs gained an advantage because of a huge height difference between the Chiefs strikers and fullbacks. Kaizer Chiefs Nurkovic measures at 193 cm while Castro is 183 cm tall. On the other hand the diminutive Mako measures at 162 cm and Maela at 176 cm. Paseka Mako will not win any ball in the air against Nurkovic and Castro, even if he jumps he won't match them while their
Post a comment
Read more 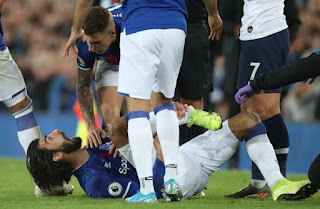 In the game against Tottenham Spurs versus Everton, we saw a horrific injury to Andre Gomes. His ankle was fractured and we could see his protruding leg bone on television as well as hear his screams and see the concern of all players some even shading tears - Son Heung-min and Serge Aurier! In the 70th minute leading to the injury, Song was elbowed unintentionally by Gomez. Who was really having a good game, who was passing magnificent and created a few opportunities for Everton by brilliant passing. In the 75th minute the injury happened, Song went in carelessly seeking retribution for being elbowed by the passing genius. Unfortunately, during Song's tackle, Gomez's foot got stuck in the turf causing it to dislocate because of the player's momentum. Injuries like this end football career's and it is a very huge concern for football players. In the PSL the insurance for players that have their careers cut short by injury has come under the spotlight in the case ag
Post a comment
Read more
More posts