Showing posts from February, 2020
Show All

Mendy is the most popular surname in world football 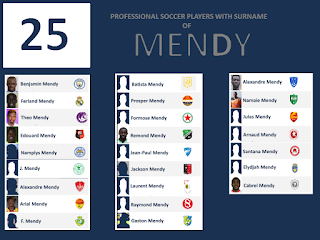 Mendy is currently the most talented surname in men's football! According to Tranfermarkt.com , there are 25 professional players playing in leagues around the world using the surname of Mendy. These players are multi-talented with some playing as defenders, other as middle fielders and strikers. Additionally, there is one goalkeeper, playing in France League 1. The surname of Mendy has roots from Africa, mainly Ivory Coast and Senegal. In fact, Benjamin and Ferland were born in France but their parents are from Ivory Coast. Many of these players have at one stage featured for France or Senegal junior national teams and some have been lucky enough to graduate to senior teams. Moreover, The most famous retired player with the surname of Mendy is Senegal's legend footballer, Rodger Mendy . Rodger Mendy started playing in the 1960s and is now retired and coaching. The most famous of them being the two brothers Benjamin Mendy and Ferland Mendy . Please view list of pla
Post a comment
Location: South Africa
Read more
More posts