Showing posts from June, 2020
Show All 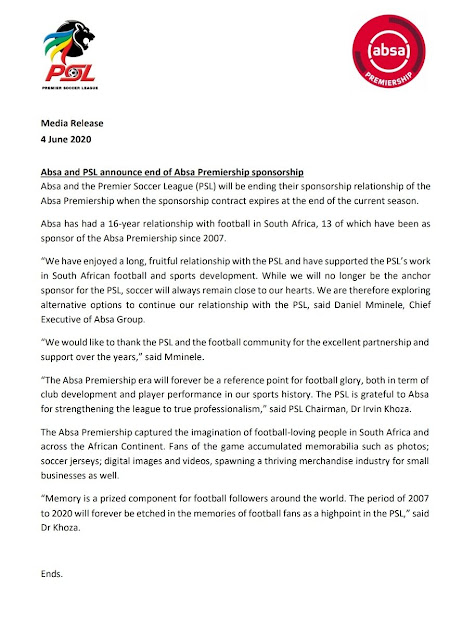 ABSA cancels sponsorship after it has been the sponsor of the Premier Soccer League (PSL) since 2007. In 2007 , ABSA replaced Castle as the main sponsor of the PSL. This means that the PSL will have no sponsorship when the 2020-21 season begins. COVID-19 is wreaking havoc in South Africa (SA) and maybe one of the reasons ABSA has canceled. The other reason may be that the current (2019-20) season has been placed on hold for over 2 months with no indication of when the season will resume. ABSA have ended their relationship with the PSL after pumping 500 million rands into the PSL over a period of 13 years. It is a decision that has stunned the media since last year ABSA increased the price money of the PSL to 39.9 million rands which means the 2019-20 season winner would receive a whopping 15 million rands up from 10 million the previous season. Currently, in SA the infection rates are increasing and the number of deaths. As of 4 June 2020, there are 37 525 confirmed cases and 792
Post a comment
Read more
More posts