Wenger's coaching record is remarkable and echos that of the best coaches in the world. The only notable failure, is not winning the UEFA Champions League trophy. His illustrious career spans over 2 decades at Arsenal and another 12 year prior to the Arsenal job coaching in France.

In 22 years, the great Arsenal coach has disappointingly only lifted the EPL cup three times. His other cup achievements include seven FA cups. However, Arsène Wenger holds record of the most EPL matches managed, a staggering 821 matches, 18 more matches managed than his all time rival Sir Alex Ferguson. The other record is that of his sole winning league team of 2003-4 season which won 26 games, drew 12 and amazingly lost no games the entire season! Before this in the 1997-98 season his side was the first team to record 10 straight wins.

The below table shows some of Arsène Wenger remarkable achievements. 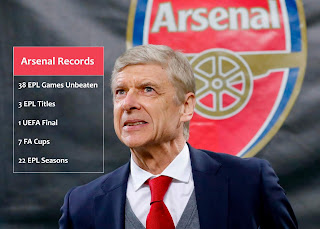 Wenger has achieved more than just winning at Arsenal, he is the man that turned Arsenal into a team that played the most beautiful football in the EPL. But among his achievements, he had also professionalised soccer in England according to Michael Cox. In his tenure at Arsenal he introduced player diets (.i.e. Japanese foods), using of supplements and reduced soccer player drinking and party bad habits.